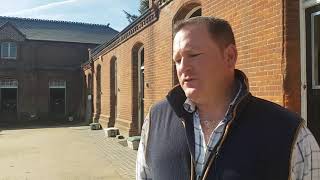 Dubai Dominion heads to Saint-Cloud on Friday as the exciting colt steps up in class in the Group Three Prix Thomas Bryon, looking to add more black type to his already progressive profile.

The Ed Vaughan trained runner ran a great race on debut behind future Group Three winner Main Edition before breaking his own maiden tag at Newmarket ahead of some nice types. That set up a couple of excellent runs at listed level, including last time out, when he only found the highly touted Sangarius too good.

“It was a very good effort and another step-up from his previous run.” Said Vaughan, assessing the colt’s most recent effort “I think dropping him back to seven furlongs was and is the right thing to do. Sangarius looked a very progressive horse, a typical Sir Michael Stoute horse, that could develop into a Group One horse for sure.”

That assessment is in line with what jockey Oisin Murphy say immediately after the race and Vaughan can see no reason why the Godolphin bred two-year-old won’t improve again.

“We don’t go looking for improvement on the gallops, we know he’s a good horse so he only ticks over. He had a little blow out over a few furlongs the other day and he’s as good as ever, physically he’s developing a bit more.”

James Doyle will take over in the saddle for his Group Three assignment and while races in France can become very tactical there is confidence he’ll handle anything thrown at him.

“He’s a very horse with a very good mind.” Explains the Newmarket based handler. “You can put him anywhere in a race and he’ll relax or he’ll go forward. I think why not have a go back up at Group Three level, he’s on an upward curve and why not give it a go.”

While the focus, for the moment, is solely on his next run there is already an early plan developing for next season.

“Long term we’ll probably have one more run this year and then we’ll put him away before entering him in a Guinea’s trial next year.”

Meanwhile the exciting Yarmouth debutante winner Magic J could also find himself crossing the channel for his next start. Well fancied to get off to a good start in his career the horse won impressively but Vaughan is keen to stress he far from the finished article.

“He’s a work in progress. I said at the time (of his Yarmouth run) he’s a horse that hadn’t come off the bridle before and you can see from how well he travels why he would be a very hard horse to get off the bridle at home. He’s going to come forward for that and he had a little breeze on Saturday just over three furlongs. He’s come out of that race really well, Oisin gave him the perfect introduction he didn’t realise he had a race. His mind was really good and he’s come forward both mentally and physically for it.”

The trainer admitted, soon after the Yarmouth success, that he hadn’t slept much in the lead up to the race due to his excitement about the colt. When asked why he holds this son of Scat Daddy in such high regard he said.

“He’s been working with some decent horses for a start, some decent yardsticks that run to their mark and work to their mark. He was galloping down on those and just coming up and joining them; we knew we had a very talented horse on our hands.”

While the Criterium at Maison-Laffitte is one of the options for his next start there are plenty of other options available.

“He’s still in the Dewhurst, obviously that’s a big step for a second run, you really need a couple of runs going into these better class of races. There’s a Group One race in France at the end of the month for him and there’s the Rockingham at York. It will depend more on ground to which race we go to.”

Wherever he goes next, it’s clear that Vaughan feels the future is very bright for Magic J with classics possible targets for his three-year-old campaign.

“It’s really all about teeing up for next year.” He explains “I don’t think we’ve scratched the surface with him yet. He’s only had one run and we’ll probably have a go at a trial if the ground is right but let’s take each step as it comes.”