Signora Cabello will be offered at Tattersalls December Mares Sale

Signora Cabello will be offered at Tattersalls December Mares Sale

Queen Mary Stakes winner Signora Cabello has been added, as a wildcard, to the Tattersalls December Mares Sale by owners Phoenix Thoroughbreds and partners Zen Racing.

The daughter of Camacho is likely to be popular among bidders having already recorded several high-profile victories both against her own sex and the boys. She scored her first black-type victory in the Listed Marygate Stakes at York, despite meeting trouble in running, before winning the Group 2 Queen Mary Stakes at Royal Ascot. That effort highlighted her battling nature to win as she fought all the way to the line. She then won the Group 2 Prix Robert Papin against the colts in Deauville, in a run that Trainer John Quinn described as a “typical, gutsy, Signora Cabello performance” before finishing a close second to Pretty Polyanna in the Group 1 Prix Morny at the same track.

“Signora Cabello proved to be an outstanding two-year-old this year, against both colts and fillies, and is an exciting addition to the Tattersalls December Mare Sale. “said Jason Singh from Europe’s Leading Bloodstock Auctioneer. “She has all the attributes to be one of the highlights of the December Sale.”

Hailed by Quinn as “the best filly I’ve trained”, she has an eye-catching pedigree that attracted the Malton based handler to buy her at the 2017 Tattersalls October Yearling Sale. Out of the Night Shift mare Journalist, who was second in the Group 3 Princess Margaret Stakes at Ascot and is a half-sister to three other Group/Listed placed fillies, she also hails from the family of 1,000 Guineas heroine Las Meninas. Additionally, she can number Group 1 winner Kingsgate Native and Group 2 Flying Childers Stakes winner Sheer Viking as relations.

“She’ll always have a special place our hearts.” said Amer Abdulaziz, CEO Of Phoenix Thoroughbreds. “Her win at Royal Ascot was as important as winning the Derby for us and will always be a very special memory. To see our white and orange silks enter the winners’ enclosure with the world watching on was an incredible feeling. John Quinn and his team have done a terrific job with her and we thank them for all their hard work. Whoever manages to buy the filly, I’m sure, will have some more great days with her.”

Added as a “Filly in Training”, Signora Cabello will be offered as “Lot 1908A” on the evening of Tuesday 4th December. 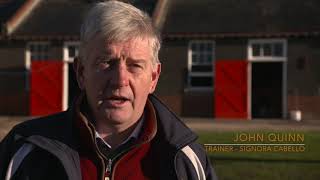