“I was battling some mental demons that I wouldn’t have beaten if this move didn’t come about.”– Ryan Maloney opens up as he continues a great start in Queensland

Jockey Ryan Maloney is a man enjoying life both personally and professionally. He currently sits second in the Queensland Jockey’s Premiership and his family are happy in new surroundings in Queensland. This tranquility would have seemed extremely unlikely to Ryan, and those closest to him, just a few months ago when he was staring down the barrel of a four month ban after falling foul of Australia’s prohibitive substance rules. That combined with closure of the Aquanita operation, for whom he rode, meant his future as a rider was in doubt. The full extent of his personal battles are well publicised and can easily be sourced elsewhere but through this darkness came a flicker of hope with the offer to ride for one of Queenland’s biggest trainers. Toby Edmonds, on the lookout for a top unattached jockey to replace the soon to be retired multiple champion Jeff Lloyd, turned to Ryan with an offer to be his number one rider. It’s an opportunity that hasn’t been spurned. 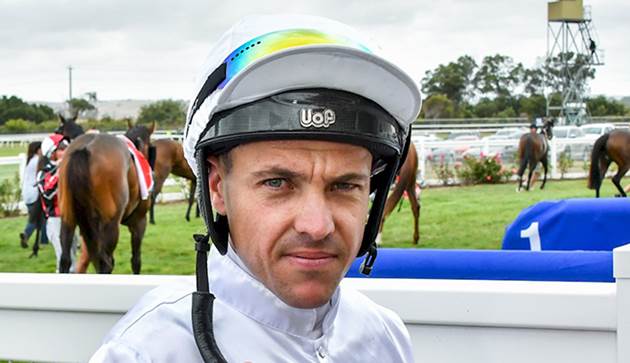 “It’s a great lifestyle, great weather and great people. Said Ryan, a day after riding the Phoenix Thoroughbreds owned Oh Mona to a debut victory. “The racing, despite what some people think, is quite strong, they’ve just had a prize money increase and the quality of horse is just as good as anywhere. I’m loving it up here and I’m getting a good reception from other trainers and owners so I just need to keep building on them and hopefully the winners will keep coming.”

Honesty and responsibility were two words that kept coming to mind while listening to the Victoria native speak. No dancing around the issues of his past, just a matter of fact acceptance of them and commitment to turn this opportunity into a huge positive step.

“I got done for a prohibitive stimulant, I was battling some mental demons that I wouldn’t have beaten if this move didn’t come about.” He admits with an air of man who won’t let the past define him. “Certainly, in a way it made me deal with them and took me on a lot better path than I was going down.”

We’ll be seeing plenty of Ryan in the White and Orange of Phoenix over the next few months not just on Oh Mona, who is seems excited about, but on our other runners stabled with Toby Edmonds. But how did a rider from Victoria end up with one of the biggest jobs in Queensland? Like with most things in his career, it seems, by grasping a opportunity when it came along.

“I rode a horse for him down in Melbourne when he bought some down there. “Explained Ryan. “I actually won three in a row on him including on Cox Plate day. I think that just cemented our relationship a bit as when Jeff Lloyd announced he was retiring he wanted a jockey that didn’t have ties with other stables so he could give them first pick riding his horses and do a lot of the work there.”

It is that word “OPPORTUNITY” that we keep coming back to in all stages of Ryan’s career in the saddle. Every chance presented to the jockey has been taken on without fear, including his start in the sport.

“I was playing local football, the coach owned some horses and kept telling me to go and be a jockey because I was too small for Footy. Recalls Ryan. “I got sick of him annoying me so he put me onto the trainer he had horses with and it just started from there. The first time I saw a horse galloping I thought that looks like good fun and I never looked back. I’ve always loved animals and once you get bitten by the racing bug it’s not easy to get out of it. I was there every morning mucking out boxes, I just loved the sporting I think if you’re passionate about something you pick it up easier than if you’re doing something you don’t enjoy.”

That change in direction came a late stage for a jockey but once he was in the saddle he was a man in a hurry.

“I rode a horse for the first time at 16 and then gained a license when I was 17 and just started from there. I probably needed a few more years under my belt really but I was that eager to start I don’t think I could have waited that long. It took me a good year to read race and learn how to ride a race. It took a little bit to get going but once I started it went well and it was good fun.”

Looking back this relocation won’t be the first time he’s had to “start over”. Early success was, maybe, taken for granted a little as he began his journey into the professional ranks but, as we’ve already discussed he’s not a man to shy away from the hard yards.

“I had quite a successful apprenticeship but when I came out of it I didn’t really do enough work to keep it going. I took quite a few years to pick my game up and start rebuilding. It was almost like starting from the bottom again. I just had to start chipping away and eventually I ended up getting a few good rides. Probably the last four or five seasons have been breakout seasons for me they’ve got better and better. Still working to that Group One winner, I’ve had a few close seconds but I’m sure one’s not that far away.”

That ambition and approach to the sport hasn’t wavered in recent years either. He has sacrificed watching the limited Queensland coverage of his beloved AFL in order to study form and watch race replays to hone his rides and review the opposition. However, that will be a small price to pay with the chance now to really push on, as a job with Toby Edmonds, means a shot at the rider’s title.

“The main goal was to work hard at the start, pick up as many rides and winners as I could and make as many contacts as I could. “said Ryan as he discussed the idea of setting targets. “Now it looks like I can have an ambition to possibly win the Premiership although it’s a long way away it’s a distance goal but one I’ll be working too.”

Well we’ll be watching closely Ryan, especially when you pull on those orange stars, and we wish you all the luck as you chase your dreams.