Ronan Whelan is a very impressive young jockey. Not only is his natural talent in the saddle leading him to great success but the way he talks about the sport is articulate and considered. We spoke to the rider as he sets out on a new adventure in Dubai riding for Ali Rashid Al Rayhi, where he’ll be donning the white and orange silks of Phoenix Thoroughbreds plenty of times over the next few months.

Whelan puts getting this opportunity down to what he describes as his “breakthrough” season in the past year, which saw him win his first Group One and land the Curragh Award for the leading riding performance of the campaign.

“To ride winners is good but to be able to do it at the top level on the international stage is brilliant.” explains the Irish jockey as he looks back on the success of Skitter Scatter in the Moyglare Stakes. “I don’t think I’d have this opportunity in Dubai if it hadn’t been for that win. It opens up a lot of doors for you and gives a lot of people confidence in you. Sometimes you get overlooked on the big days so when you get the chance to go and do it on the big day and you win, it’s a little hard to explain just how important it is to your career. I’m very thankful to those who put me up on the big day.”

It shouldn’t really come as a surprise to anyone that the man from Kildare is finding success. Around horses all his life, he quickly showed an aptitude for riding while racing in the pony ranks where he rode around 100 winners in three seasons.

“My dad worked with horses in the bloodstock industry and at the weekend I’d always go into work with him and got my affinity for horses there.” says Whelan. “My uncle had ponies and I went hunting with him. My cousin also went pony racing and I saw him going and wanted to give it a go and that’s where the real bug to become a jockey came from. I went into starting my A levels, but I struggled a bit with those, so I wanted to give being a jockey a go before my weight got out of hand. My dad said I could leave school if I went to Jim Bolger’s and I started there just before I was sixteen. I’ve been with Jim ever since.”

Perhaps what most strikes you talking to the 26-year-old is just how level headed he is about racing and his career. Here’s a young man who has been successful very quickly but doesn’t show any signs of that going to his head. For his part Whelan puts it down to his apprenticeship with Bolger.

“The main thing I’ve learned from Jim is mentality, he’s kept me very grounded and reminds me that every day is a school day and that you can never know enough. He’s even helped me with my riding style, like my posture and gets onto me to this day about it. He always wants you to improve and hard work should be put into everything you do. It’s all about a good work ethic at his stable.”

Whelan rode his first winner at age sixteen on just his second ride when he piloted on Bolger’s Seachtanach to victory at Navan in 2009. He would become Champion Apprentice three years later and again credits his “boss” for his early successes.

“It did me no harm to have a winner so early in my career but at the same time the boss only let me have a certain number of rides in my first season and half, he didn’t let ride for everything for everyone. He restricted me a bit, to mind my claim, and didn’t want me to go lose it too quickly. I definitely think that’s stood me in good stead as I think I wouldn’t have been ready if I did lose it too quick. My first year out of being an apprentice was a quiet year for me, only 10 winners but the work ethic instilled in me by Jim and his team keep me going.” continued Whelan, looking back on the years that have helped shape his career. “I was used to doing really well but he made me realise that one poor year wasn’t that bad and just kept me going. He has a brilliant staff down there too, who do the hard work day in day out through good and bad.”

The quiet days didn’t last long as Whelan started to find himself back in the winners’ enclosure on a more regular basis. He would gain his first listed win on the Bolger-trained Lady Wingshot in the Knockaire Stakes at Leopardstown in November of 2012 before adding the Group 3 Gladness Stakes on Custom Cut the following April. A second win at that level came when Divine landed the Ballyogan Stakes at the Curragh in April, 2016. But it was to be at Royal Ascot that same year that the native of Monasterevin would make his name on the biggest stage when he rode Jennies Jewel to land the Ascot Stakes for Jarlath Fahey.

“That was one of the biggest days of my career to that point.” Said Whelan clearly enjoying the memory. “It was in my second year as a professional and you need a high-profile win like that just to cement your place in the weighing room. I was friendly with the Fahey family, who gave me that winner, so I was lucky enough to have them and the mare at that time for my career. It was big.”

Whelan’s career trajectory since then has all been, if we continue that metaphor, heading for the stars. But with success and big rides comes pressure and expectation. That’s something that he seems not only to be taking in his stride but relishing!

“The way I look at it that’s why we’re in it.” Is rider’s matter of fact answer to the question of pressure. “Every jockey wants to get to the top and the pressure is a privilege so while it’s a bit more on your back is good to have that bit of extra attention. It all means you’re doing something right and you look to make the best of the opportunities you get.” 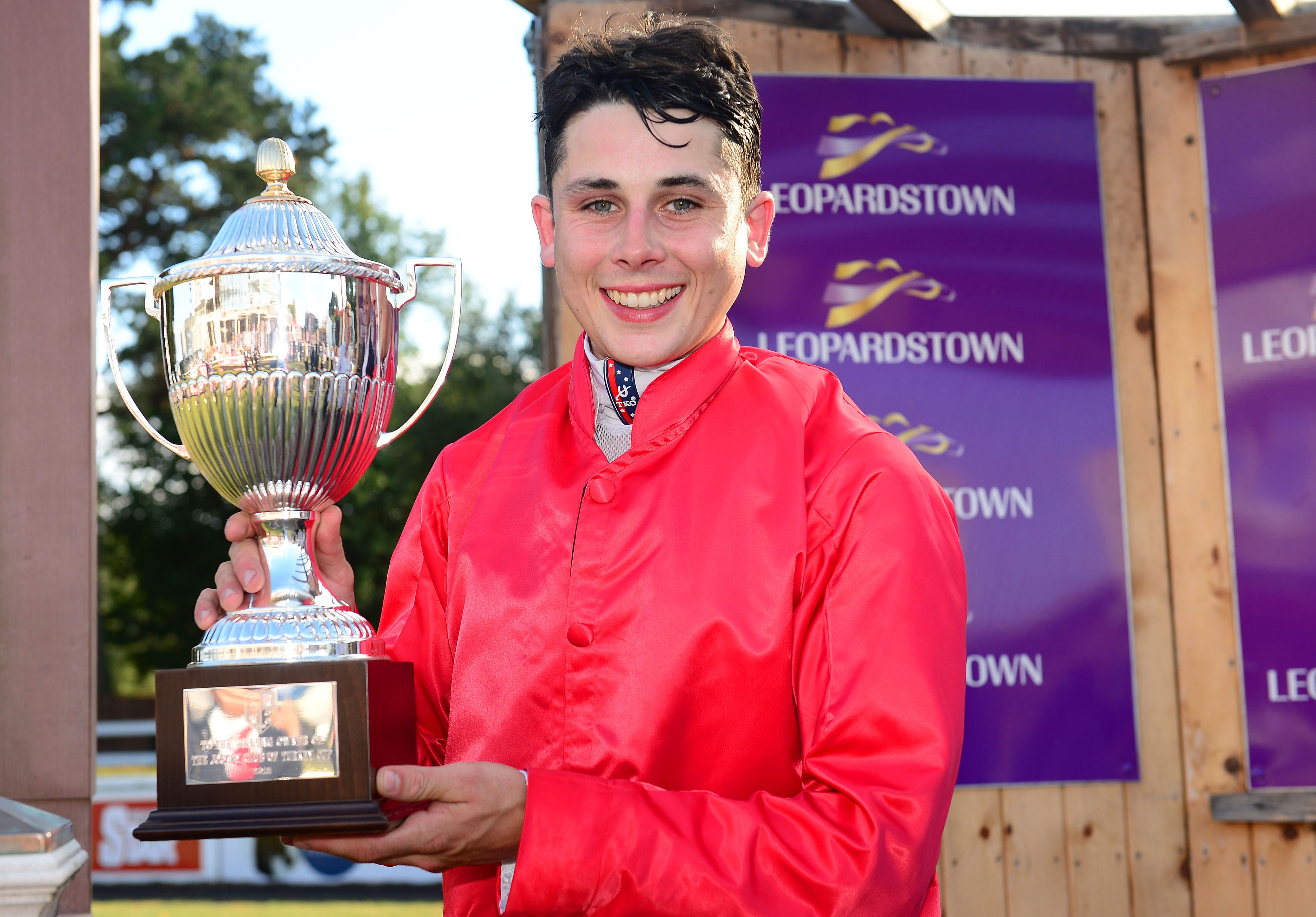 These next few months will be a bit of an unknown for Whelan as he races in Dubai for the first time. He had his first experience of what to expect last week at Jebel Ali when he got the leg up on four for his new boss.

“It’s completely different to what I’ve been used especially the heat. Even at the height of summer at home I don’t think I’ve experienced riding in heat like that. Obviously, the way the surface rides and the way a race unfolds is all new to me, it’s all a learning curve but a great experience and I can’t wait to ride again. There’s plenty to see and plenty to learn here.”

Clearly already enjoying himself in new surrounds he almost ended up not riding in Dubai but he got an offer he couldn’t refuse.

“I had Australia in my mind, just as somewhere I wanted to see as I’ve been to Dubai before on holiday but Dermott Farrington (Phoenix Thoroughbred’s racing manager and Bloodstock Advisor) put my name in the hat and asked if I’d be interested and when people like that are offering you the job you jump at the chance. I couldn’t have been looked after better since I arrived from Mr Al Rayhi to the jockeys here and all the staff, everyone has been very welcoming.”

It’s still early days out in a foreign environment so understandably the idea of setting targets is something Whelan is too keen on at this point, but his attitude reflects those attributes he learned from Jim Bolger.

“I’ve been riding out for a week now and seen all the horses, there seems to be plenty of fire power. I’m just hoping I can keep the show on the road and keep the stats up.” Explains Whelan. “I’m hoping we can have a good season and give Mr. Al Aayhi, and the team, as many winners as I can. Given it’s my first time riding out here I’m really approaching it day by day to see what happens. I’m still finding my feet, I want to work it out a bit more before talking about goals.  On a personal note, it would be a bit of a bucket list thing for me to ride a winner at the Carnival. Even before this job came about it was something I wanted to do, that would be a big deal for me.”

Whelan will be in the Phoenix Thoroughbreds Silks for the first time on Thursday when he rides Luxor Temple and Gotti at Meydan.