A Thunderous start for the Ladies Syndicate and Connor Beasley

A Thunderous start for the Ladies Syndicate and Connor Beasley

It was a perfect start for the new Phoenix Ladies Syndicate on Thursday Night as their first ever runner, Walking Thunder, was a winner and formed part of a double for Connor Beasley.

An off-shoot of Phoenix Thoroughbreds, the female-only ownership group has been set up with the concerted goal to encourage more women across the UAE to get involved in racing and racehorse ownership.

Having shown up well in a five-furlong trial, hopes were high for a decent showing from the son of Violence and he didn’t ever look like disappointing. After a good break he tracked the early pace, always looking like he was going well, and as the field turned the bend for home jockey Connor Beasley asked him to go and win his race. He did so very easily.

“He’s got a real good attitude and was very professional throughout. “Reflected Beasley on Friday morning. “He jumped the gates well and travelled really well all the way around, especially into the lane. As soon as I gave him a squeeze and asked him to go and do his job he really knuckled down and put his head down. I was really impressed with how he hit the line. He impressed a lot of people and gave me a great feel.”

There was plenty to take from the performance of the juvenile colt but one thing in particular seems to have struck his rider.

“The way he picked up from off his strong travelling pace was the most impressive side of his performance.” Explained the jockey “I rode him on his trial over the five furlongs and he travelled well there too but this was about seeing if he could pick up off that and he really did it well to gallop away.” 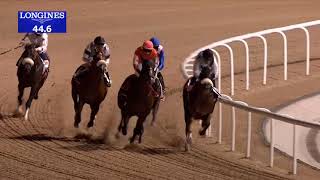 It’s still clearly early days in the horse’s career and it’s easy to get carried away after such a taking debut, however Beasley believes he has the attributes needed to become a decent sort.

“I think he’ll be quite versatile in time.” He explains.” The way he travelled during the race means you can put him where you like, I wouldn’t say he needs to be on the front end to win. The way he goes about things makes him ideal for the dirt, you can just place him where you want, and you know he’s got that finishing kick at the business end of things. I ride him every morning, so I know a fair bit about him now and he’s very level headed for a young horse. He’s been doing everything the right way, like a good horse should. He won in the manner of a good horse, but he’ll only improve from that, so I definitely think there are bigger and better days to come with him.”

That will certainly be the hope of those behind the Phoenix Ladies Syndicate, who’s orange and white colours will become a familiar sight over the UAE season.

“We delighted to have our first win at Meydan.” said a jubilant Pamela Cordina, manager of the syndicate. “We had a lot of faith in the horse and he proved us right. Trainer Ahmad bin Harmash did an amazing job with him and we look forward to an amazing season.”

Walking Thunder’s victory was the first of two winners for Beasley on the night, who this season is first jockey to bin Harmash and brings into focus the upward mobility of the young rider’s career. Last season, his first in Dubai, he rode 11 winners and he’s hoping to double that in the coming months. He’s off to a good start to meeting that target, having already doubled his tally of winners at Meydan.

“Meydan is a place people watch so it was great to nick a couple of wins there. “said Beasley who scored once at Dubai’s premier track in the last campaign. “It’s very important personally to start well now I’m first jockey to Mr. bin Harmash. I was second jockey last year behind Silvestre De Sousa but with Silvestre elsewhere I’ve been given this great opportunity. It’s another step in my career and for someone to put their trust in me like this is brilliant, so it was great to get two for the team so early; I’m very grateful to all involved. My career seems to be going in the right direction at the moment in terms of going up the ladder. Hopefully I can make the most of this chance and land on a few good horses that can take me onto the big stage.”

That career almost finished very prematurely three years ago, when Beasley had a truly horrific fall at Wolverhampton. He’d just finished being an apprentice and well on his way to meeting his target of 60 winners for the year, when he came off his mount leading to a fractured skull, bleeding on the brain and a broken back. His injuries left him in a head brace and kept him out for eight months.

“It knocked me back in my career a bit as I had to come back, without my claim, and prove to everybody I could still do the job.” Reflects Beasley in a rather matter of fact way. “It was a bit of a tough time for me and those around me, but I had a lot of support from them to keep driving me forward. When I did come back a lot of trainers gave me a chance and I rode 61 winners the following year. I never had any doubt I’d comeback, there might have been with others, but I was lucky to have people to carry me through it.”

The man from county Durham in the North East of England says he’s left that all in the past, focusing only on moving forward and it’s clear to see he is back on track.